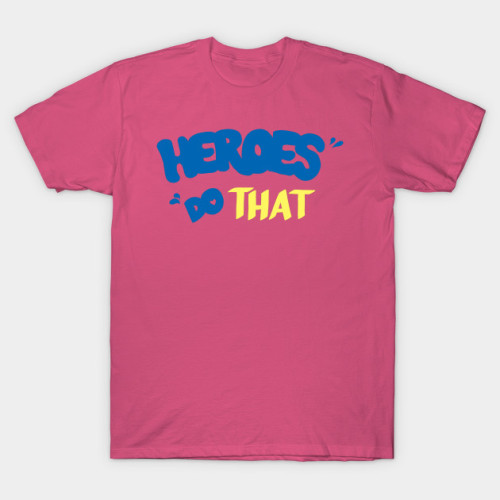 [IMAGE DESCRIPTION: A bright pink t-shirt, with the text “HEROES DO THAT” bracketed by moisture droplets.]

GOOD MORNING. In light of recent controversy, @sorcery101 and I have created what is sure to be the de rigeur fashion item of this convention season.

sirshannon
reply
Do it, Gary!

In Which a Major Corporation Flirts With My Wife by John Scalzi
Monday June 14th, 2021 at 8:33 PM

Also, yes, we reserved one of the F-150 Lightnings, i.e., the new electric Ford truck that will come out next year. I wrote a Facebook post explaining why, which I will repost below.

So, in 2015, after I signed that big contract with Tor, one of the things I was going to do was secretly buy Krissy a convertible, as a way of showing my appreciation to her for everything that she had done to help us get to that point — as I’ve frequently said, after all, without Krissy, I absolutely would not have the career that I have had.

I was looking at the Mustangs for this, but when I sneakily brought up convertible Mustangs in conversation to her, she was all, “meh, they’re okay I guess,” and then later just straight up bought a beater convertible from a pal for really cheap just to tool around in for the summer (I mean, really cheap; I have musical instruments that cost more). At that point I admitted to her I had been planning to get her a car but that it hadn’t worked out, so, basically, whenever she decided she wanted a new car, she had a redeemable coupon for one.

In the six years since, she hasn’t really thought to redeem this coupon, until this last week when I was showing her some videos about the upcoming electric Ford F-150, which, aside from having very good range for an electric and a massive closed storage space where the engine would be and huge hauling and towing capacity and more electrical outlets than some apartments (including a 240 V outlet), can also, in the event of a power outage, actually power one’s home for two or three days (with an optional installed power inverter, which of course we would absolutely get). Krissy’s eyes lit up like a house whose power was now being provided by a big-ass truck.

Sooooo now we have a reservation in for a Ford F-150 Lightning, and we are both happy: Krissy because she’s going to get a very cool truck which she will absolutely have a use for out here in the country, and me because I finally get to give her a car (and also because it comes with a bunch of super cool technology stuff which I will totally be a geek for). Expect to see Krissy tooling around in this thing sometime in 2022.

sirshannon
reply
They reached turd immunity over a decade ago.

Marc-André Weibezahn has created Affine Tuning with AudioKit!  Use your body movements to create unique musical experiences with a collection of interactive compositions which react to your movements in real-time.

Don’t worry! You don’t have to be a dancer to use it. The musical feedback will always sound in tune, which lets you focus on your expression. We interviewed the developer and he shared his experience creating this fun new app. Plus, he has some advice for people building their first music app!

What was your inspiration for making the app?

I had done reactive room installations before, which used body tracking and responded with sound as the only feedback channel. The main goal of these was to create an exclusive connection between movement and sound that goes both ways. Later, I wanted to create a similar kind of experience, but give the audience authority over the place, time and duration. This need for mobility, together with the good quality of iOS’ “Motion Capture” feature, led to the decision to make an app.

When started with AudioKit in late 2019 I already had some years of iOS development experience, but very little experience with audio programming and I only knew some synthesis basics from an introductory course at university. So my experience with AudioKit was dominated by learning both about coding for audio, and digital audio in general.

The example playgrounds helped me a lot, and I think now with the cookbook, AK should be even easier to pick up. I wont lie though, if you are coming to this completely fresh, at some point you will have to learn about the fundamentals of synthesis, sampling, and all the other stuff. I cannot imagine to having done this using iOS’ audio framework directly.

AK gave me easy access, including powerful functionality, like timestretch/pitchshift, bitcrusher, different reverbs and much more. I would often discover that something I’d like to try out was only a few lines of code away.

What did you learn from making the app – Any advice for people?

I feel I can best give advice to other “beginners”:

On the topic of audio programming: If you are coming from programming for graphic driven systems, especially in an OOP way, you are used to create and throw away graphical objects (views etc.) all the time. Do not translate this approach 1:1 to audio programming! Learn about the audio graph first, and then try to find a model that fits its more static behaviour. I had to rewrite the part of my system which interacts with the audio graph twice because I did not pay enough attention to this.

And in general, I think it is easy to underestimate the vast field that is digital audio, mostly because there is not as much general knowledge about it, as sound in media is very underrated, compared to graphics and images. The interactions of the smallest details, down to the level of the waveform, are very complex and, in my experience, less predictable than with graphics. But that also means that there are many interesting and exciting things to discover, if you bring time and patience for exploring.

Besides technical topics: Try out your ideas as quickly as possible and show them to other people! It will give you energy and motivate you to go on. It is much too easy to hide behind your screen and always stay on a technical level, but if you ultimately want other people to interact with your work, you should go out and meet them.

sirshannon
reply
Do it, Gary!

This has appeared at the bottom of Xcode’s Text Editing > Editing settings, sure to make many vi users very happy indeeed:

The change is heralded in the Release Notes:

Using the new vim features is super easy. When the Vim keybindings are enabled, the bottom of your source editor gets this, showing current state, plus a few reminders for those whose muscle memory isn’t quite current. It’s up to you to know your hjkluybn stuff.

You can tap i to insert text, switching to text entry mode and then ESC to return to navigate. Using a colon : doesn’t do anything here, so no :wq, which is not a huge surprise as neither w nor q makes a ton of sense in Xcode.

Anyway, if your a vimficianado, congratulations and enjoy the new toy.

sirshannon
reply
every time I've ever seen a demo by someone using vim, their struggles convince me to never use vim.

tingham
You just haven't met the right people yet.

For Apple to continue to deny these is dishonest, factually wrong, and extremely insulting — not only to our efforts, but to the intelligence of all Apple developers and customers.

This isn’t about the 30%, or the 15%, or the prohibition of other payment systems, or the rules against telling our customers about our websites, or Apple’s many other restrictions. (Not today, at least.)

It’s about what Apple’s leadership thinks of us and our work.

It isn’t the App Store’s responsibility to the rest of Apple to “pay its way” by leveraging hefty fees on certain types of transactions. Modern society has come to rely so heavily on mobile apps that any phone manufacturer must ensure that such a healthy ecosystem exists as table stakes for anyone to buy their phones.

Without our apps, the iPhone has little value to most of its customers today.

If Apple wishes to continue advancing bizarre corporate-accounting arguments, the massive profits from the hardware business are what therefore truly “pay the way” of the App Store, public APIs, developer tools, and other app-development resources, just as the hardware profits must fund the development of Apple’s own hardware, software, and services that make the iPhone appeal to customers.

The forced App Store commissions, annual developer fees, and App Store Search Ads income are all just gravy. The “way” is already paid by the hardware — but Apple uses their position of power to double-dip.

And that’s just business. Apple’s a lot of things, and “generous” isn’t one.

But to bully and gaslight developers into thinking that we need to be kissing Apple’s feet for permitting us to add billions of dollars of value to their platform is not only greedy, stingy, and morally reprehensible, but deeply insulting.

Apple further extends the value argument, and defends their justification for forced commissions, by claiming responsibility for and ownership of the customer relationship between all iOS users and each app they choose to use.

This argument only makes sense — and even then, only somewhat — when apps are installed by a customer browsing the App Store, finding an app they hadn’t previously heard of, and choosing to install it based on App Store influence alone.

But in the common case — and for most app installations, the much more common case — of searching for a specific app by name or following a link or ad based on its developer’s own marketing or reputation, Apple has served no meaningful role in the customer acquisition and “deserves” nothing more from the transaction than what a CDN and commodity credit-card processor would charge.

The idea that the App Store is responsible for most customers of any reasonably well-known app is a fantasy.

It isn’t the App Store that has enabled all of the commerce on iOS — it’s the entire world of computing and modern society, created by a symbiotic ecosystem in which Apple played one part alongside many others. The world was already moving in this direction, and had Apple not played its part, someone else would’ve. The App Store is merely one platform’s forced distribution gateway, “facilitating” the commerce no more and no less than a web browser, an ISP or cellular carrier, a server-hosting company, or a credit-card processor.

For Apple to continue to claim otherwise is beyond insulting, and borders on delusion.

At WWDC next week, these same people are going to try to tell us a different story.

They’re going to tell us how amazing we are, how important our work is, and how much they value us. And for thousands of Apple employees who’ve made the great products and platforms that we love, including the hundreds of engineers presenting the sessions and working the labs, it’ll be genuine and true.

But the leaders have already shown us who they really are, what they really think of us, and how much they value our work.

Please forgive some sloppiness in my metaphors or phrasing — my writing skills are pretty rusty — and I’ll return the favor to anyone who responds.
Read the whole story

Excellent takedown, I 1000% agree and I also suspect that Apple won’t be listening to the ATP boys going forward as it would introduce them to “uncomfortable” facts.
Space City, USA
Next Page of Stories